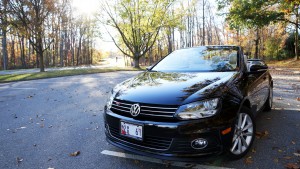 Many VW Eos owners really enjoy their car, and that is an understatement. If they have to choose between bacon and ice cream, they’d rather take the EOS out for a spin.

There are a lot of things to love about this hidden-gem hard top convertible, which is totally a biased opinion because I have stolen one and in the process of trying to keep it for myself. This car is a nice looking coupe in one instance and completely transform itself into a classy, luxurious convertible in less than 30 seconds. Kids see it and they call it the Transformer, grandma sees it and bets on her 401k that she saw you drove off in a different car yesterday. Your significant other sees it and you can say farewell to your EOS.

Then on the other hand, we have a ratio of 3.14 out of all EOS owners who are very pissed they would rather give birth to a kid who will grow up and eat all their bacon and ice cream than keeping the car in sight for another day. Only mostly, because of one annoying issue. And that one issue, which has always been haunting the EOS like a plague since her early 2007-2012 models is all about the roof.

Well, let’s say you purchase an empty fish tank from a shady john doe on craiglist and drive that thing home. During that 5-mile trip, it rains. So by the time you get to your driveway, you probably have a 1/2 full aquarium and couple of angel fish busy making more of their glory baby fish in it.

Well it might not be as this bad for other people but the problem exists and there are many complaints.

To be fair, the leaks also happen to other convertible and even regular vehicle when the preventive care for the seal is being neglected. 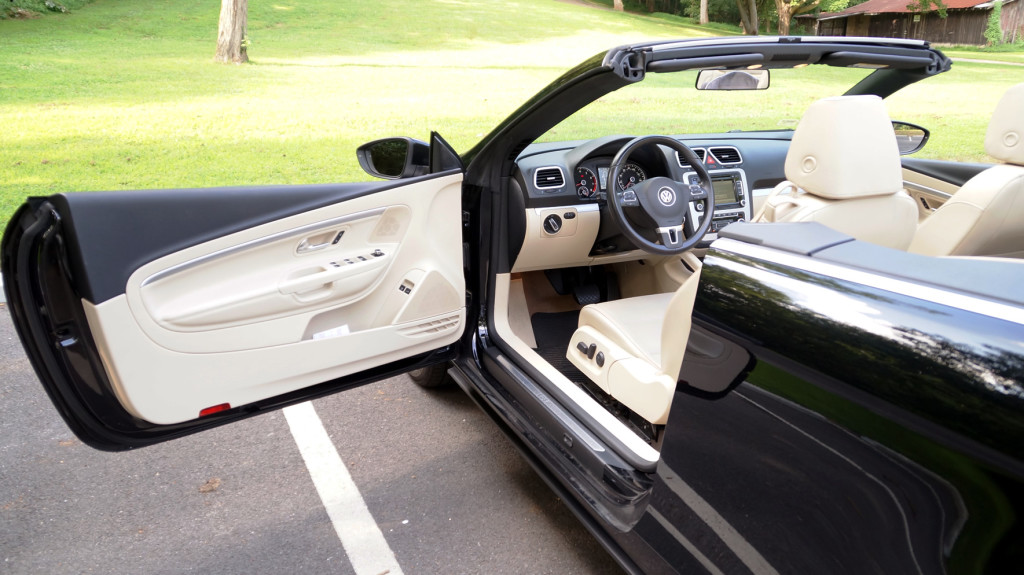 Fortunately, the roof leak isn’t a terminal illness. Two common reasons that cause the leak are:

If the first problem occurs, the second follows very soon after. When the rubber seals got loosen or deteriorate, water is able to get inside the pillar and frame of the car. At this point it won’t reach you just yet, the drain tubes does a great job to lead the water out of the cabin. Over time, all the dust, dirt, debris and bird shit begin to clog the tubing and before you know it, you are taking a shower in your car. According to legend, some people use this opportunity to wash their interior and dashboard.

The good news is, the fix is actually in the car manual. Something that not many bother to read these days. Like the User-Agreement Terms of Service thing.

From what I know, a few good mechanics at a VW dealer got their hands dirty with the leaking issue in one of their first EOS customers. They couldn’t figure out what cause the issue for days; until one of the good men there came across the EOS’s user manual when he was bored and there was nothing else for him to read in the bathroom, not even a shampoo bottle.

And there it is, a wild solution appears!

Now it turns out to be quite simple. The outer rubber seals get dried up because of the sun, salt and other elements from the seasons. They start to change shape and shrink in size a little, which gives way for water to pass through. So all these gentlemen brought out their air compressor, blew away the dirty stuffs in the A-pillar drain tubes, cleaned all the rubber seals and applied this secret ingredient called Krytox (which also clearly mentioned in the manual) directly on to the rubber seals. Bravo! No more leaks.

It was a happy ending. The mechanics felt like a champ. The car felt happy. Krytox manufacturer felt like million buck. Until the clueless owner comes back in the next 8 months complaining the roof leaks again.

Now you don’t want to be that kind of owner, so let’s do this routine roof seal maintenance ourselves. After all we’d like our bacon dry on the next drive under the weather.

– A clean car: It’s best to work on your EOS when she’s clean and smells good –you know Eos is that hot Greek Goddess of Dawn, right? Anyway, it’s a good habit to include the roof care routine in your quarterly detailing schedule. I recommend to have the process takes place a few days before November and last days of April. If your local weather is always winter…you might’ve bought a wrong car. But you can still pick a sunny day to do the deed.

Do not take your car to a gas station or automatic auto wash, unless you want swirl and scratches on the paint and get the rubber seals destroyed. Try to do a quick hand wash using our waterless wash guide instead. It takes 30 minutes and could be one of the best things you do to the car every month. 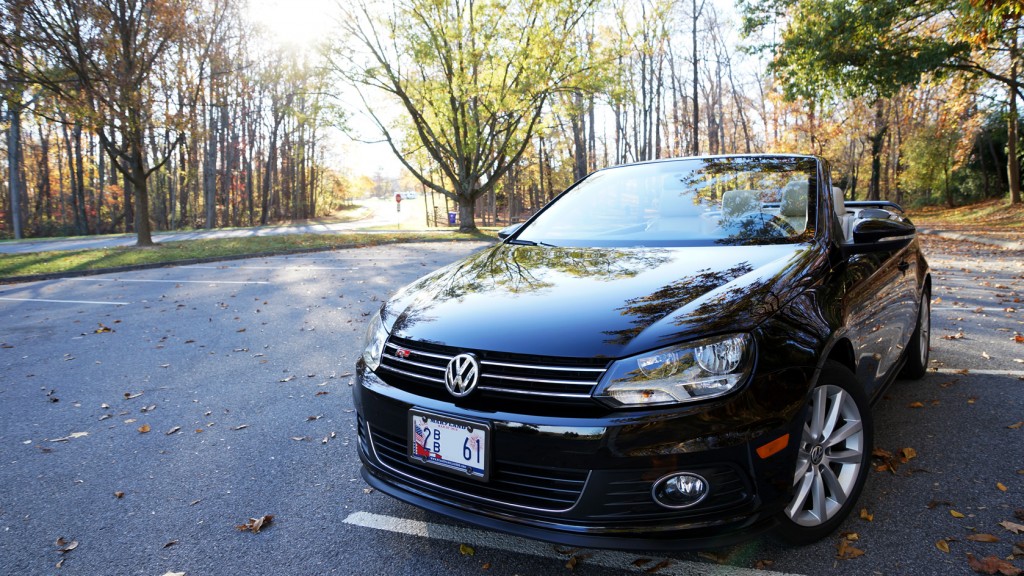 – Air Can or Air Blower: You may need a can of air to blow out debris in the A-pillar drainage tubes. If you think long-term, buy an electric air blower because it’ll also make things easier during pollen season –you can read more about that at the end of the waterless car wash article. 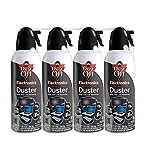 652 Reviews
Performance Tool Red 600W Single Speed Wilmar W50063 Garage/Shop Blower
$24.16
View product in new tab
– Krytox: This is the rubber lubricant recommended by VW. You can find this bottle on Amazon for about the cost of 3 full-size stuffed crust pizzas. It’s expensive because it’s genuine. Mechanics at the dealership use this.

I list two options here, they are both Krytox. Buy one that has better price.

– einszett Gummi Pflege Stift (easier on the wallet): Gummi what? My thought exactly when I first learned about this sorcery. Fortunately, there is a line of translation right under the German title –it read: “Rubber Care Stick – Cleans, conditions and protects rubber weather seals.”

I have been using Krytox for couple of years and it gets a little pricey for me. I used about 3 bottles which now has become over $100. When I was about to order the fourth one, I was recommended Gummi Pflege Stift by a Audi mechanic friend who uses it to treat the seal on the S5 Cabriolet and R8. After further research, I learned that it is the same thing as that genuine Krytox bottle. As matter of fact, turns out it has been used way long before Krytox to fix rubber seal leaks on convertibles and other European cars. This bottle is also well known in the BMW community.

After the first try on the seals, I fall in love with it right away. The seals restore to their excellent, pristine condition within a few wipes just like when using Krytox.

The Gummi Pflege Stift does a phenomenal job as the Krytox, while only costs 1/3 of its price. What does it mean? It means you might have just saved enough for 2 actual pizzas and a soda — but don’t worry, hand-washing the car and lubricating the roof will offset the surplus calories. It’s also a lot more convenient to apply the lubricant with Gummi Pflege Stift because the foam head makes it very easy to spread the solution onto the rubber seals. 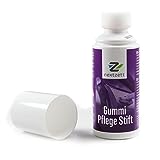 Here’s the general illustration that shows you where we need to apply the treatment. You don’t neccessarily have to follow the order, just make sure you don’t miss any part. Now with the Gummi Pflege Stift on one hand and a ONR dampened microfiber cloth on the other, let’s go in the details of this process. 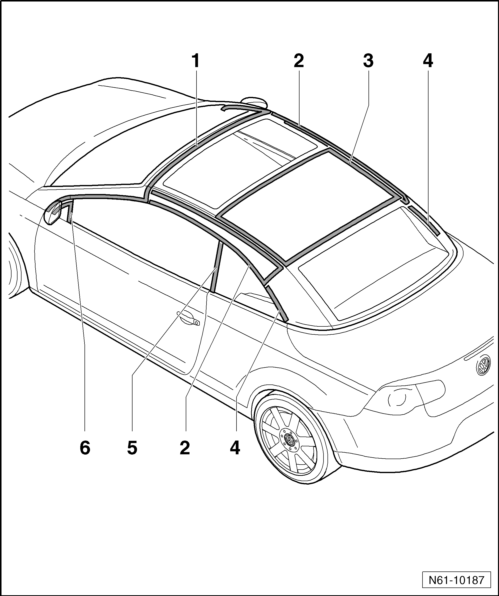 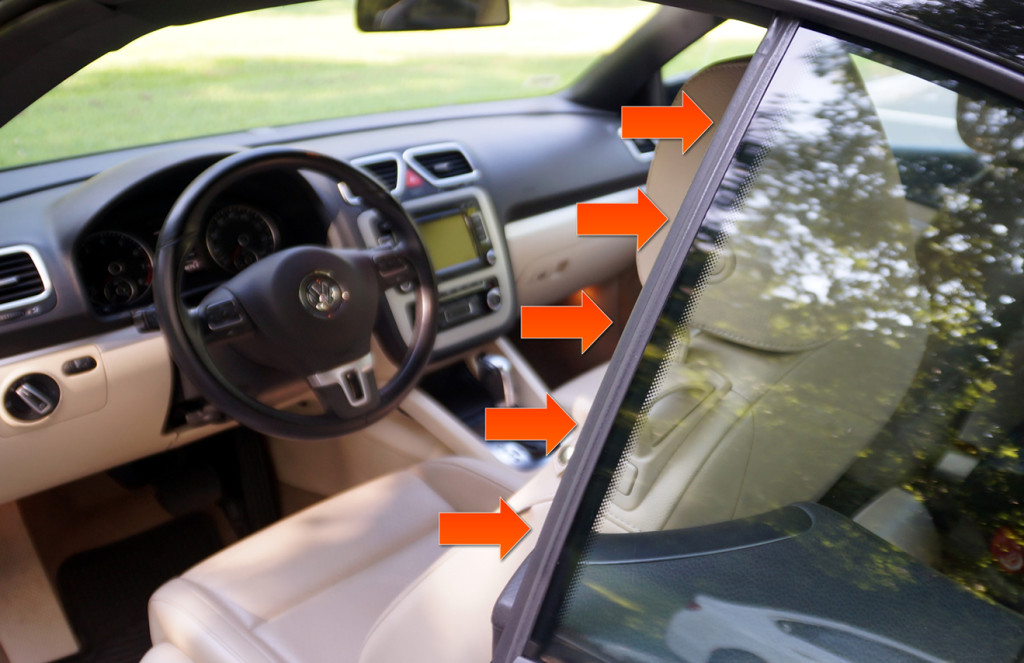 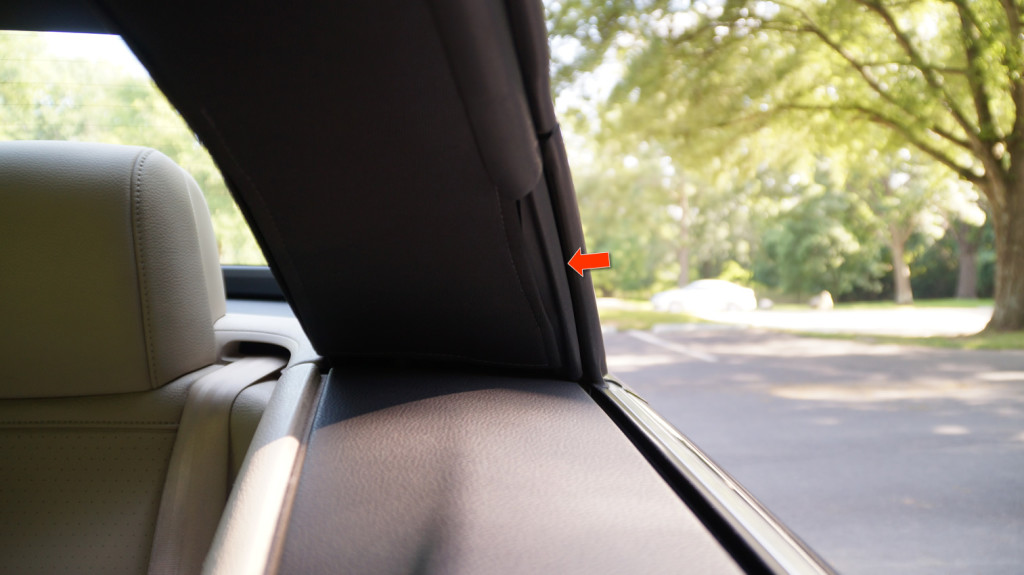 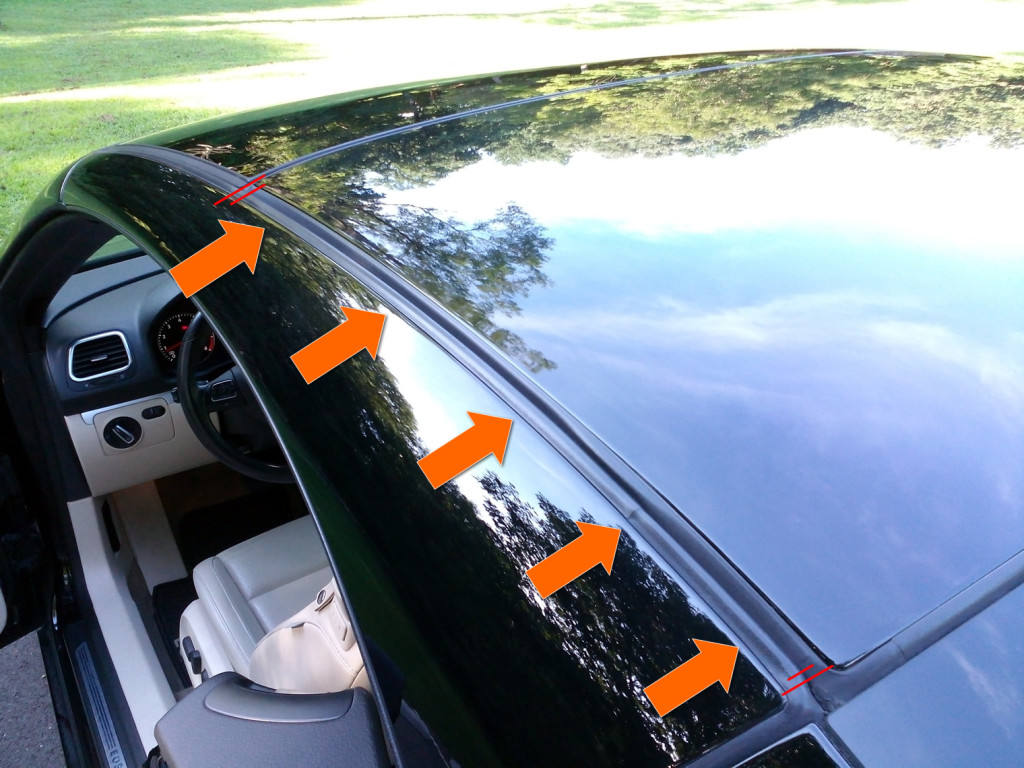 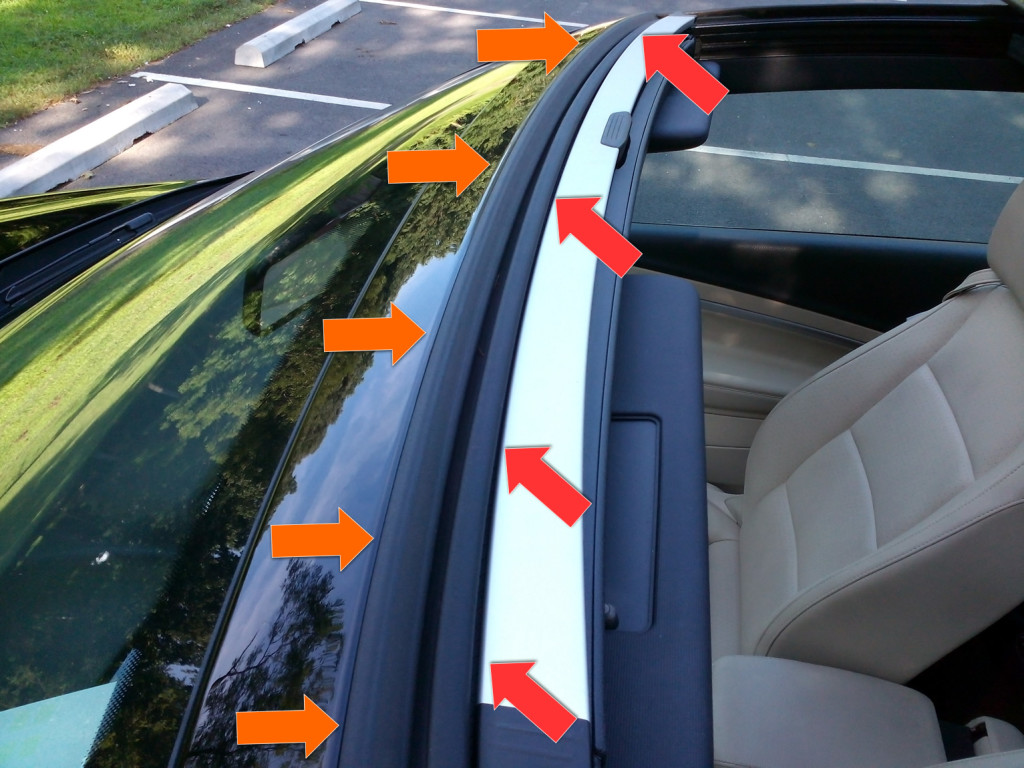 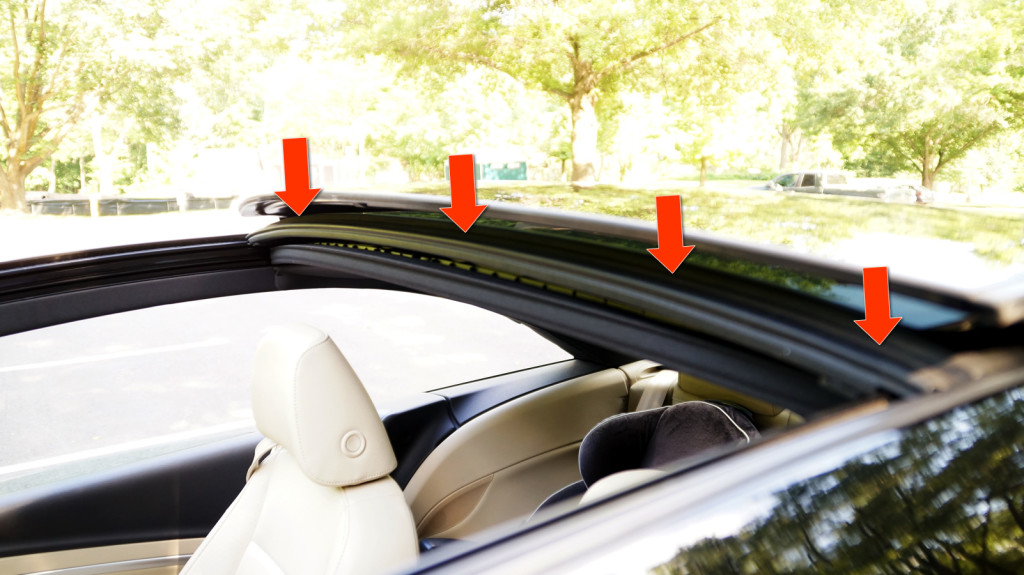 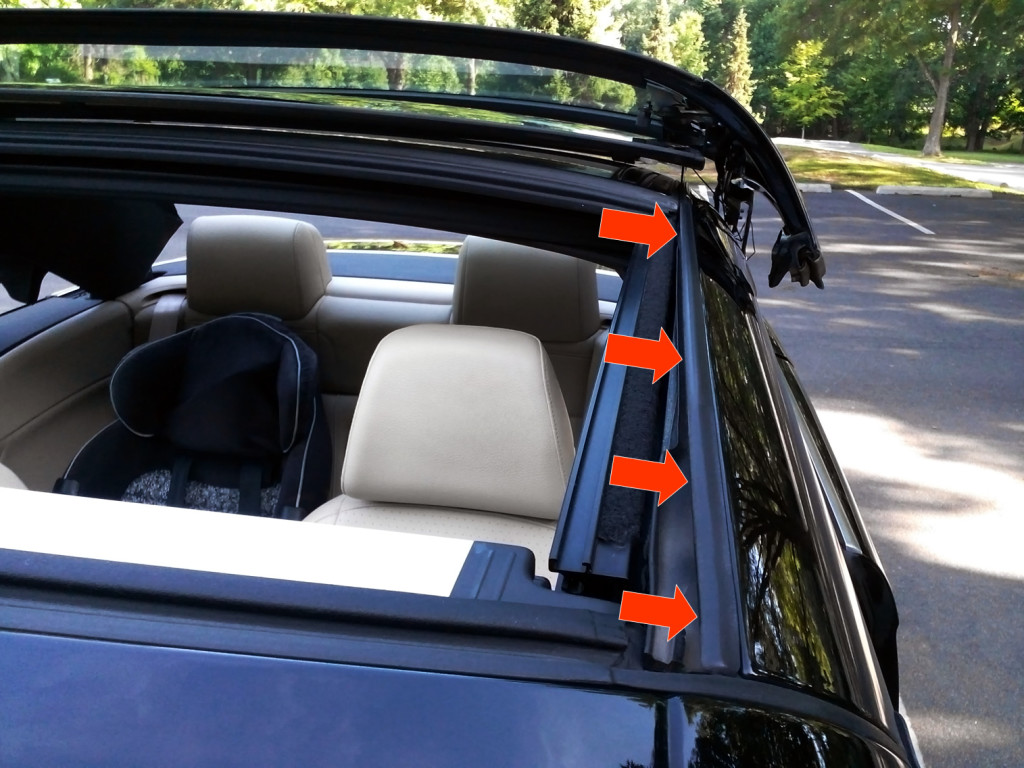 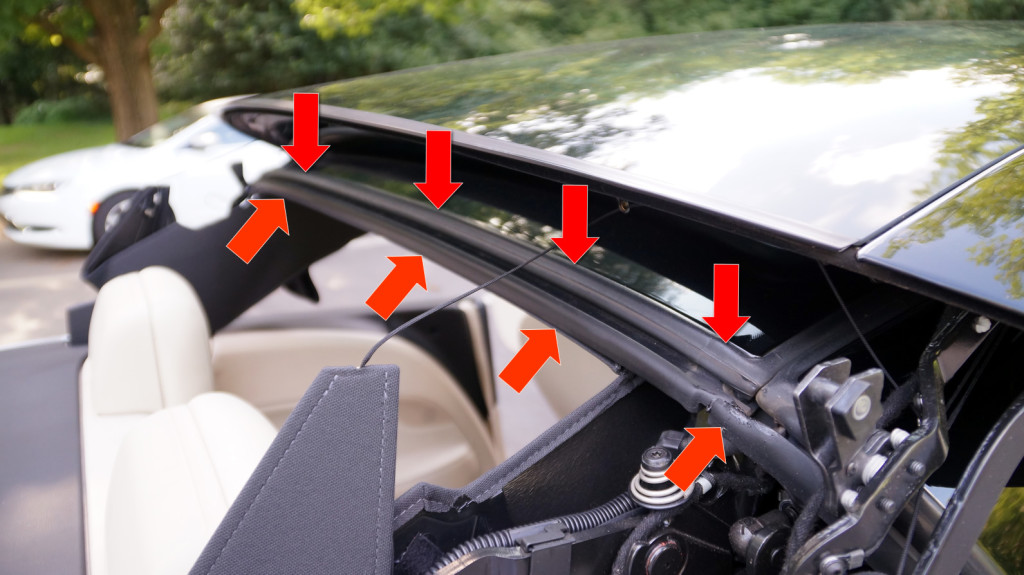 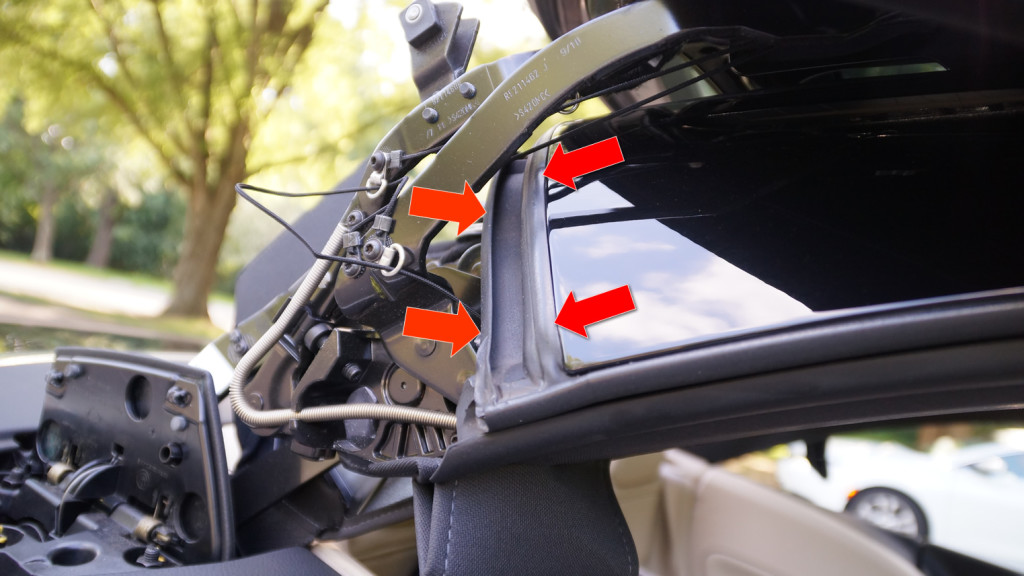 1. Use the spray solution made from ONR Rinse-less Wash & Wax bottle, clean the metal base where the rear windshield sits. If you don’t know what on earth these ONR things are, take a quick look at the Waterless car wash guide. Or if you don’t have the wash product handy at all, you can just use rubbing alcohol.

2. Use an air can to blow any debris out of the drain tubes by the top sides of the front windshield. If water gets in there, it should be able to drip out easily like this.

That’s it! This process probably takes less than 20 minutes of your time but it goes a long way.

Join our Facebook Eos Owners group when you got a chance. Post a comment if you have any question. Share a picture of you, driving the Eos, with the roof down, in a blizzard, wear a swimsuit, with your dog and your newly wed wife when you dare. It’s such a time to be alive ;)