Well the last couple of days have really put me under the bus. First off, a really bad, bad spring fever. This year’s weather is like a teenage girl’s mood, one day it’s sunshine in the 80s — the next it’s 40s and pouring. Wait if we’re going to have any snow in the summer. But anyway, the weather makes it really difficult to fix the second problem that I got myself into.

So as the title implies, I have a Toyota Corrola that just broke down at the same time I was sick (bad luck always comes in three).

I was driving and doing all the things guys do while driving, like cursing at the next idiot who can’t drive properly. Then out of the sudden karma stroke. As I gently accelerated to 35 the car stalled itself with no throttle for a mere second and I could have sworn I felt a mini earthquake under the hood before it’s back to normal again. The only difference now is that it’d take two red bull before I could turn the damn steering wheel. Plus it’s 80s out and the AC stopped working.

It turned out the nut that holds the serpentine belt’s tensioner sheared off from the motor. That means the belt is completely loosened without the tensioner in place; and the water pump, the delightful A/C, Power steering and the rest of all the crap that make a modern car modern are simply dead. 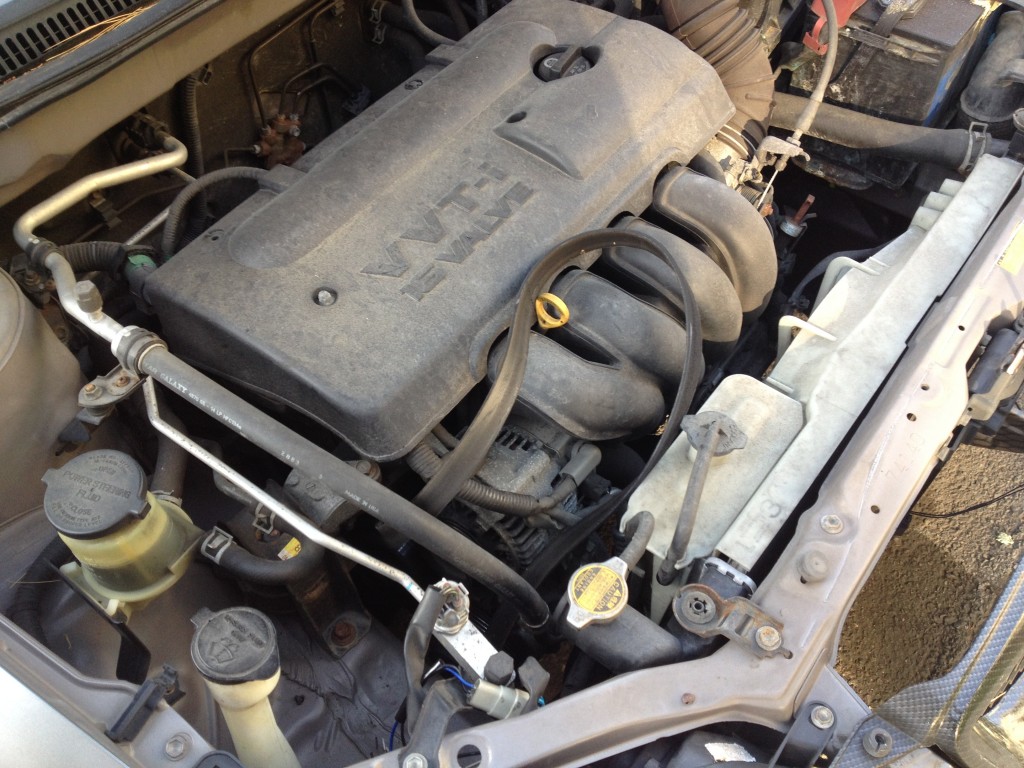 Then the third issue is, this bolt breaks right at the beginning of the thread so a part of it still stuck on the engine block and hidden under a jungle of wires/metal stuffs that I’m so certain that I’d kill myself if I made in contact with any of them. That means there is no way to get it out easily. Look at the picture below and you’ll understand why.

It’s the 17mm bolt (pivot bolt) that goes to the engine block. The 19mm is one you use to adjust the belt.

Now long story short, I brought it to the nearby auto shop. It was a scary ride because there was nothing to cool the radiator (haha those liquid coolers for CPU is nothing!) and the heatwave that day only made life worse. They looked at it, shook head and gave me an estimate of $1200 and a week to fix this problem. I totally expected that price tag because it seemed pretty serious to me, but being a stubborn head I was like heck no. So I drove it home and as soon as the car made it to the parking spot, it’s dead. It was running on the battery the whole time anyway.

Fortunately, I looked up some information online and it turns out a bunch of other people have the same freaking issue (design flaw?). Some says if you could find a mechanic who isn’t afraid of welding the rest of the bolt out it won’t be too hard, the only thing is he’ll have to separate the engine from the body. That means he won’t be able to do it at my home and this car would need a lift. Mooore $ !

So I took advice from this thread and tried it myself (and succeeded!). Here are what you need: 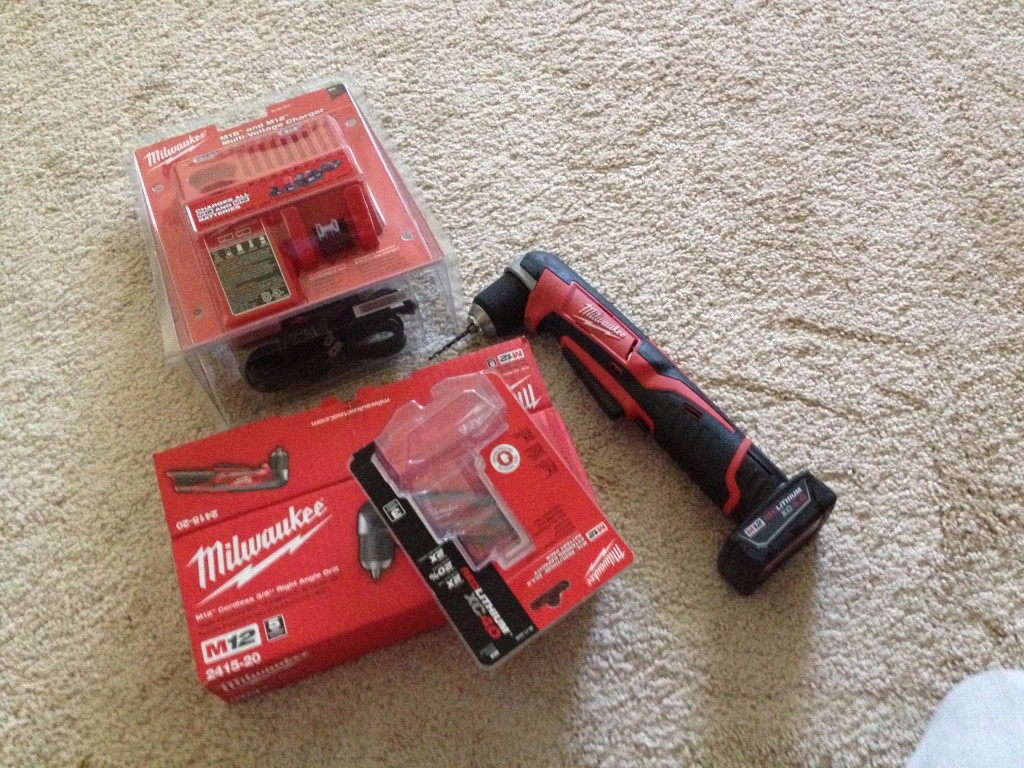 Then you also need this drill bit (1) and a spriral screw extractor (2) from Homedepot. Get the angle drill set (drill+battery+charger) there too if in stock. 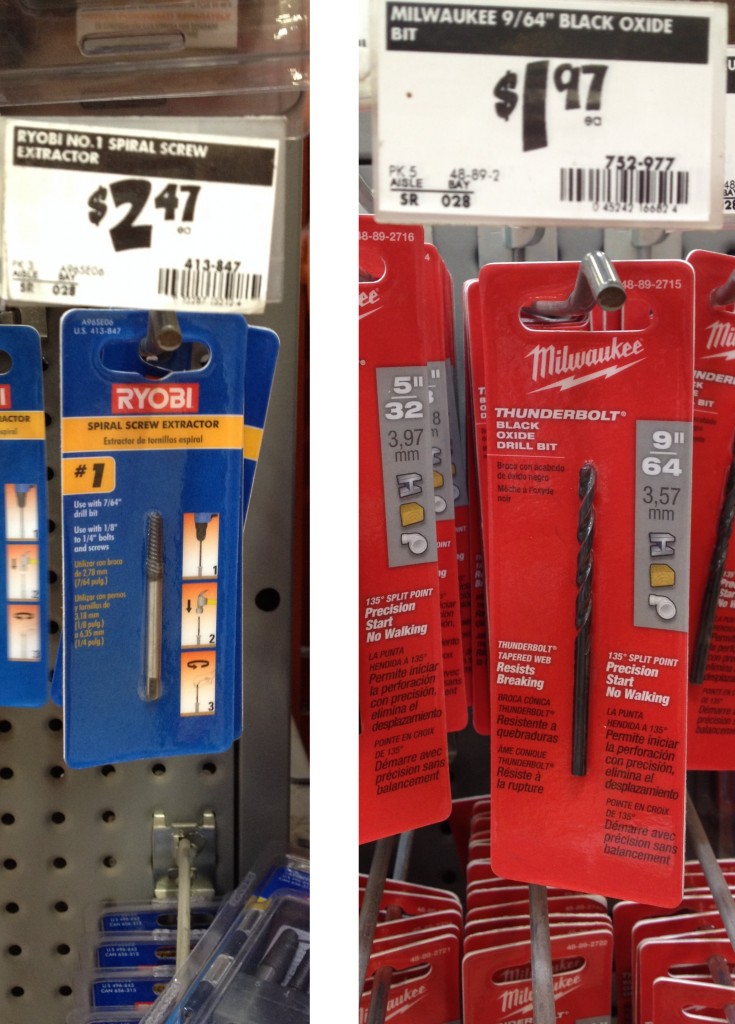 Finally, you need a toolkit and a car jack. I hope you already have those laying around. They are pretty essential. If not, you may have to stop by Harbor Freight.

1. Start taking off bolts that hold the marked parts below. Don’t disconnect any fluid holders, you only need to clear the way to raise the motor a little bit and make room for the drilling later. Remove the serpentine belt. 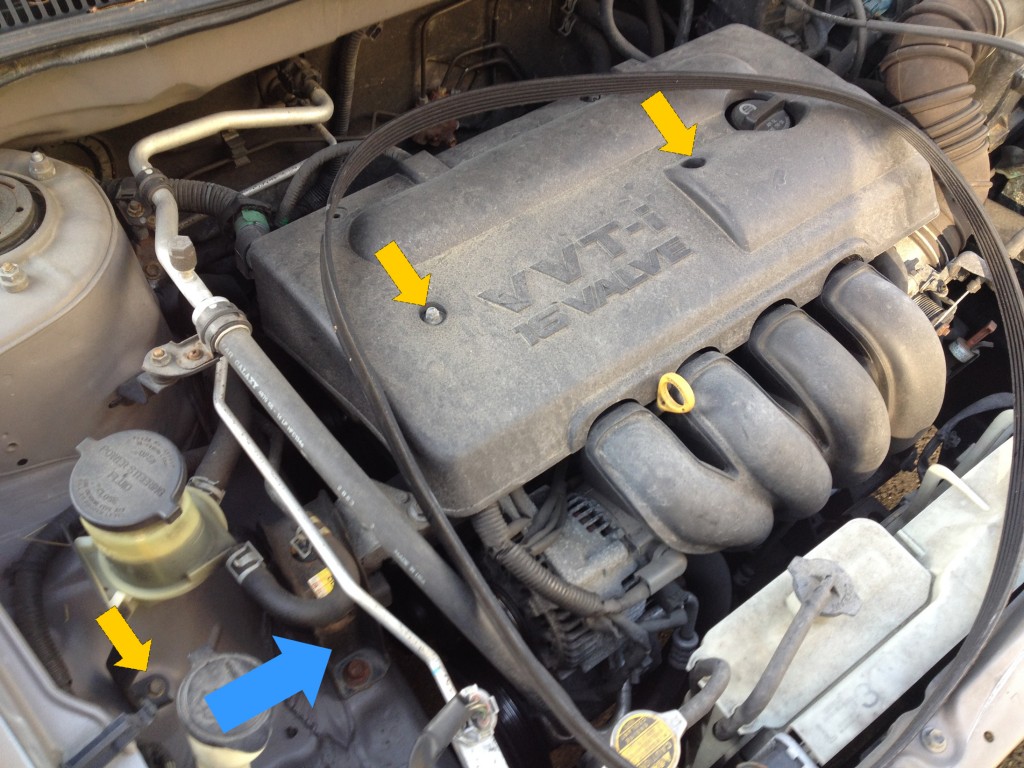 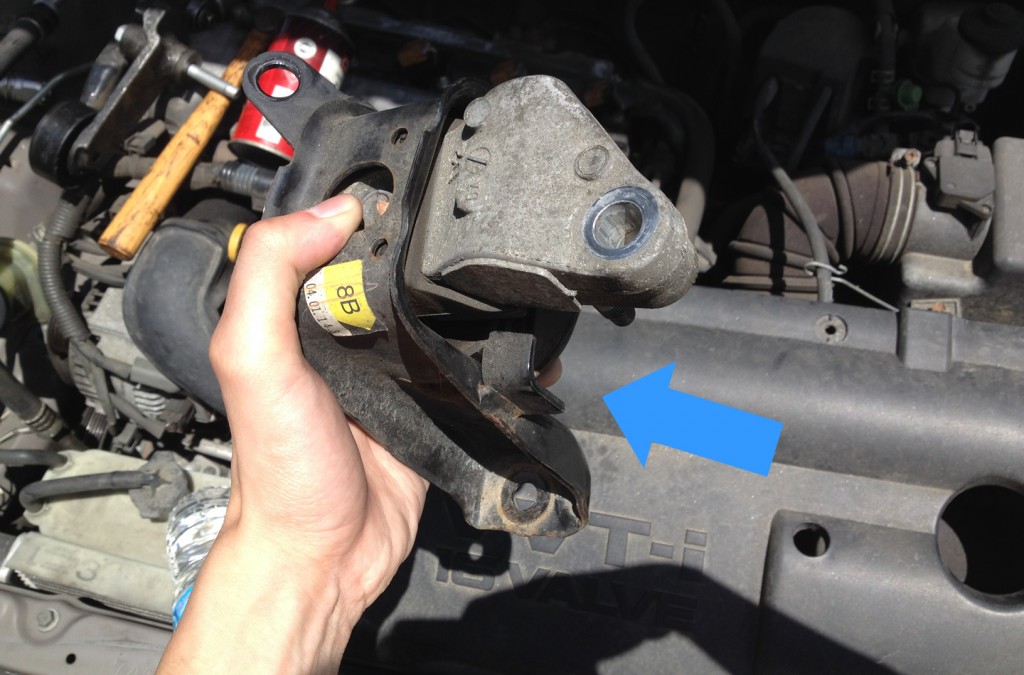 2. Now with the passenger’s side engine mount off, you can raise the motor up a little bit on this side. I put a towel in between to ease the point of  contact. 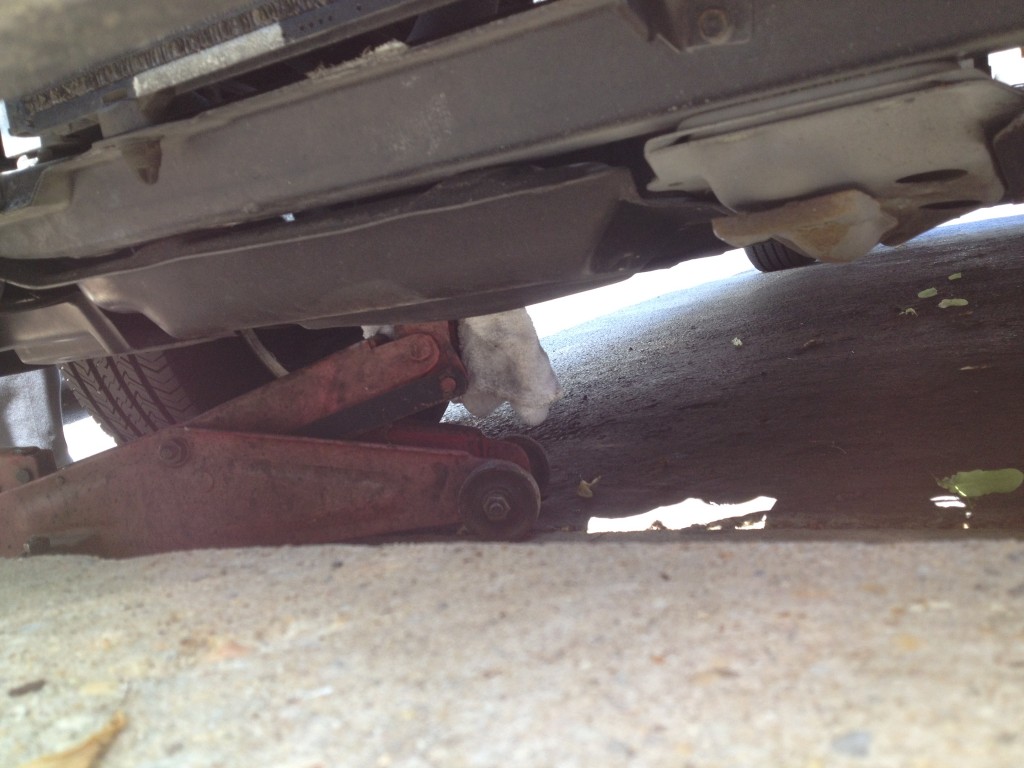 3. Once the engine is raised properly, it should tilt up like this. Then you can start removing the tensioner itself. You should be able to recover the broken bolt, a washer, the tensioner and another nut.

4. Locate the rest of the broken bolt that stuck on the engine block. Set your drill forward and use the aforementioned drill bit (1) to dig a hole into the broken part.

5. When it’s deep enough, go ahead and plug the spriral screw extractor (2) into the hole.

6. The screw extractor now should be able to stay by itself. Use a wrench and slowly turn it counterclockwise to remove the left over part. You may struggle with this a little bit but keep going. 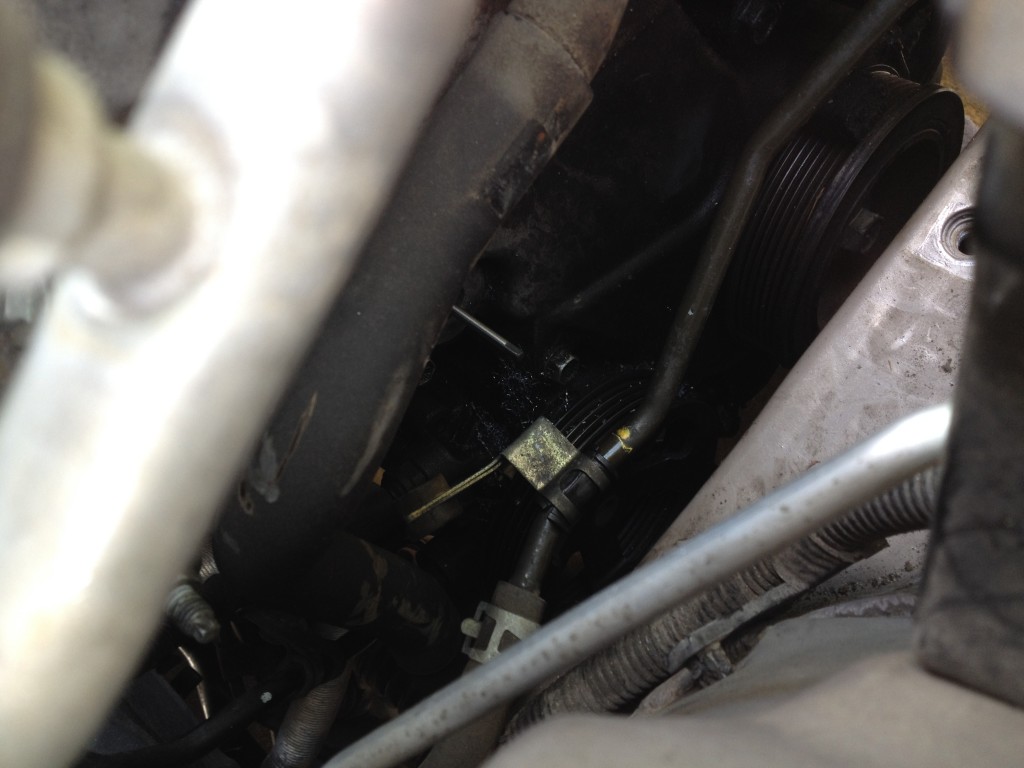 Here’s a picture of a new one & the old one. Put everything back in reverse order and you just saved yourself $1000 or maybe more. 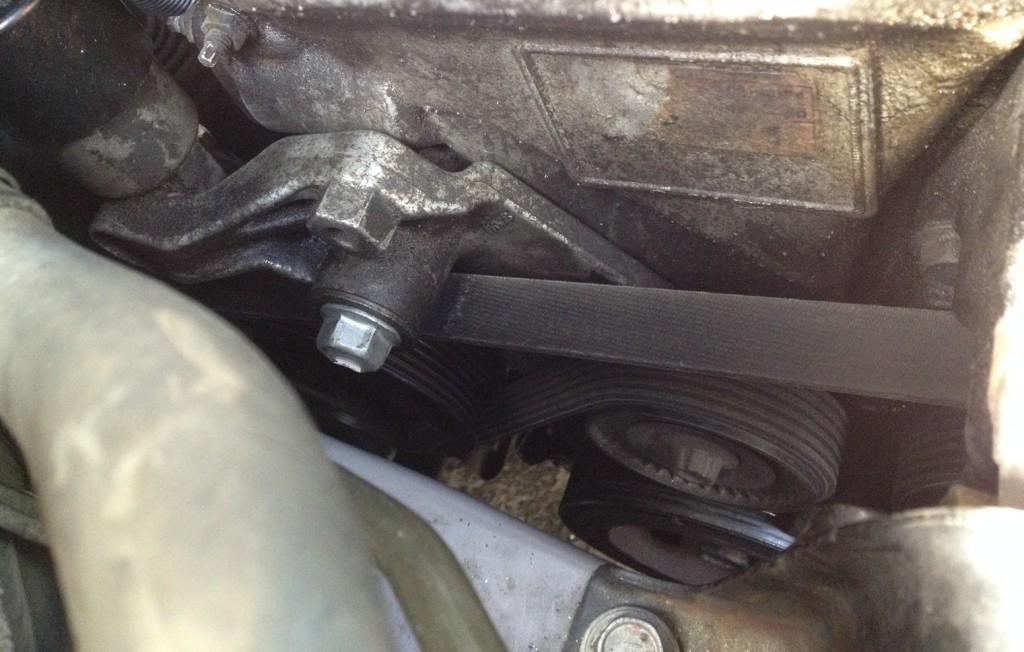 Here’s a diagram of the serpentine belt fyi. 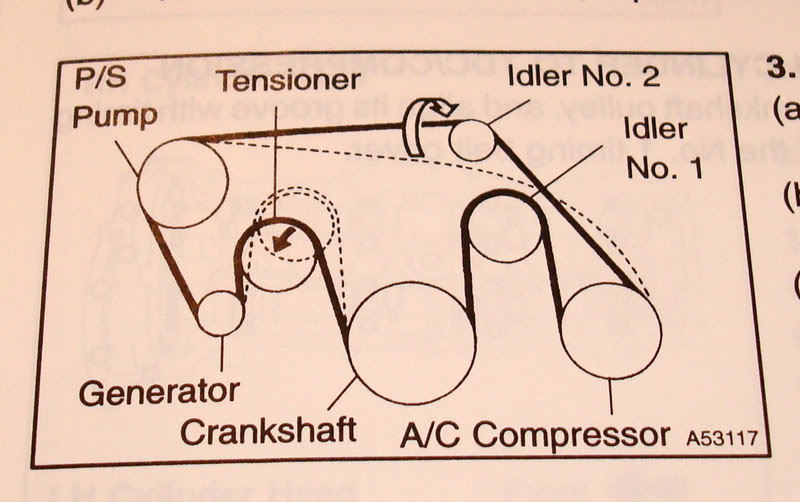 Ready to be back on the road again like her sister (right) :D !

35-Minute DIY Waterless Car Wash & Wax
--...it's now the perfect time to admire your shiny car. Because once you’re driving off the lot, the the greatest apocalyptic shitstorm in the history will immediately occur..

Car and House Wash in the Winter using the cordless SunJoe pressure washer (with video)
--... ...get the garden hose, the pressure washer, gas or another cord for power then drag them all to the driveway. By the time I finished all this, you probably completed 7 seasons of GoT..

Efficient LP Heater for Garage –Low cost, but is it Safe?