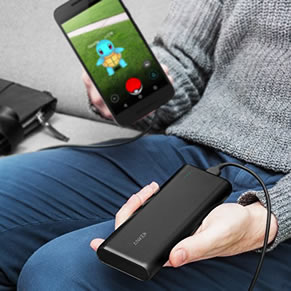 Unless you have been living under a Geodude lately, just a few weeks since Pokemon Go happened and we are now facing a challenge like no one ever was before: our phone isn’t capable of searching far and wide like we could. Two things that go out the window first are your monthly LTE bandwidth and the dead battery. I really want to know what network and battery the Pokedex is using.

Anyway, those of us who have Comcast internet perhaps you could connect to your public xfinitywifi, or FiOs hotspot if you have Verizon; which both should be available everywhere in the States. That probably saves you a bunch of data and solves one of our 1st world problems.

But how about when a Togetic appears and you only got 2% left before the phone dies ? Are you gonna plug your charger in at a public location and risk getting $500 fine + jail time? Also when dangerous people like these guys are out there, I wouldn’t risk it.

Where were the old days when kids could play outdoor all day long without being told it’s too dangerous to do so. Maybe Pokemon Go could change that. Like this youtuber who finds out everyone in his neighbor are playing Pokemon Go. Or this local police department activating lures all day nonstop (photo). Well, #MakeOurCityLavenderTown !

I digress. So here are some of the best portable power banks that could extend the life of your device battery from several hours to couple days. They could keep your phone and Pokemon Go on the road long enough for to you to be the very best. Momma didn’t raise no quitter. But always remember to wash your underwear everyday. 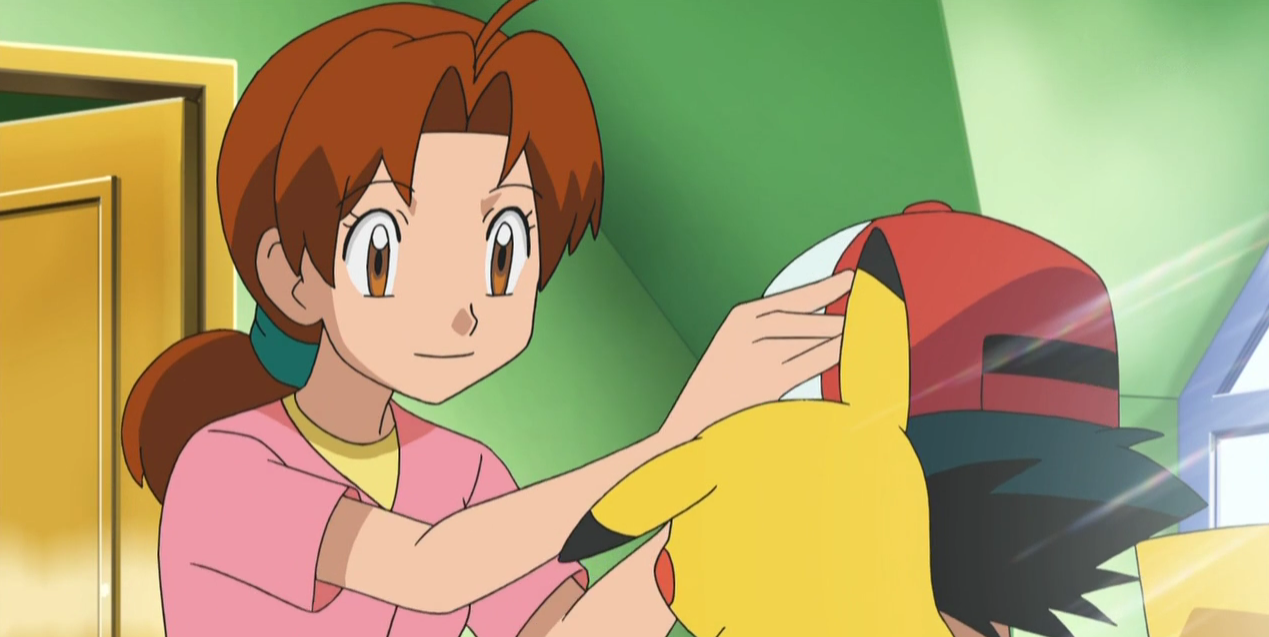 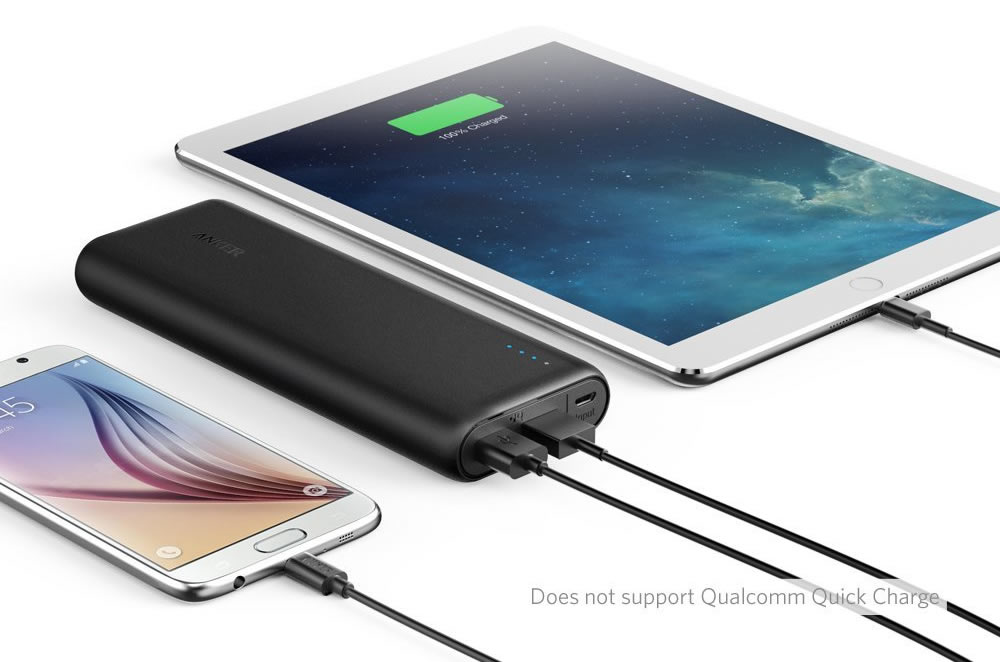 The PowerCore models are one of the highest rating portable battery units on Amazon. It’s packed with 6 powerful Panasonic 3400mAh Li-ion batteries (NCR18650B) and Anker’s own proprierary techs for power current protection: PowerIQ and VoltageBoost. They both have a thing to do with charge delivery and energy efficiency for your device. Just to make sure stuff doesn’t explode like some part of King’s Landing.

The manufacturer advertises the PowerCore 20100 could charge your iPhone 6 up to 7 times over and 5 times for Galaxy S6, but our test showed that it averages about 5 or 6 times at maximum effort. Not too shabby for an affordable power bank. Many others can’t even.

Since Pokemon Go requires lot of travel, you’ll also find the rugged shell particularly useful. Our staffs went through the old flimsy plastic shell external batteries surprisingly quickly, because we dropped them like we dropped our phone. It always goes down like this:

$500 smart device fell mid way, had faith that we could catch it with our leg because of somemysterious reason — ended up kicking it into the wall.

Plus, phones always land on the screen. It is known. 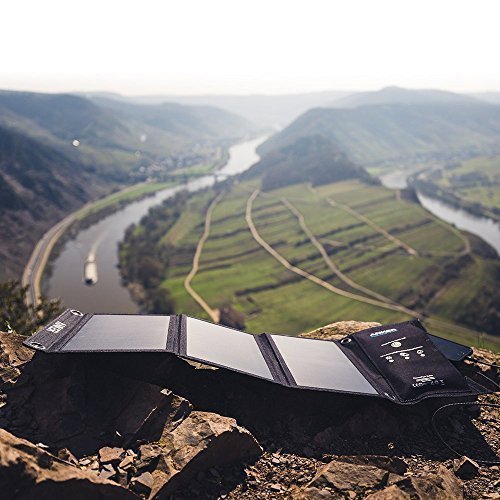 I am not sure what we call for having the fear of running out of charge on a battery pack to charge your dead phone; but if you have that anxiety problem and you don’t want to solely rely on just a single power bank like the PowerCore above, take a look at RAVPower 24W Solar Charger.

Now you don’t have to stay inside all day and wish a rare Pokemon just appears, you can actually go out and enjoy the real world; like in 3D, but real. Got the whole solar system and all.

But first, don’t get fooled by the 24W number. Solar charging is only up to 23% efficiency, meaning it could deliver at best 2.4 amps per port, total 4.8 amps output maximum. But 2 amps are all you need to safely power your phone from sunrise to sunset.

Know what even better ? PowerCore 20100 + the RAVPower 24W Solar Charger. With these two arm in arm, your family will never see you again. Only drawback is, the panels are actually bigger than it looks –unless you could somehow figure out the arc reactor or harness power from the Tesseract then that’s a whole different level of Pokemon Master. We gotta settle with this for now. 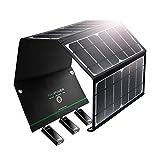 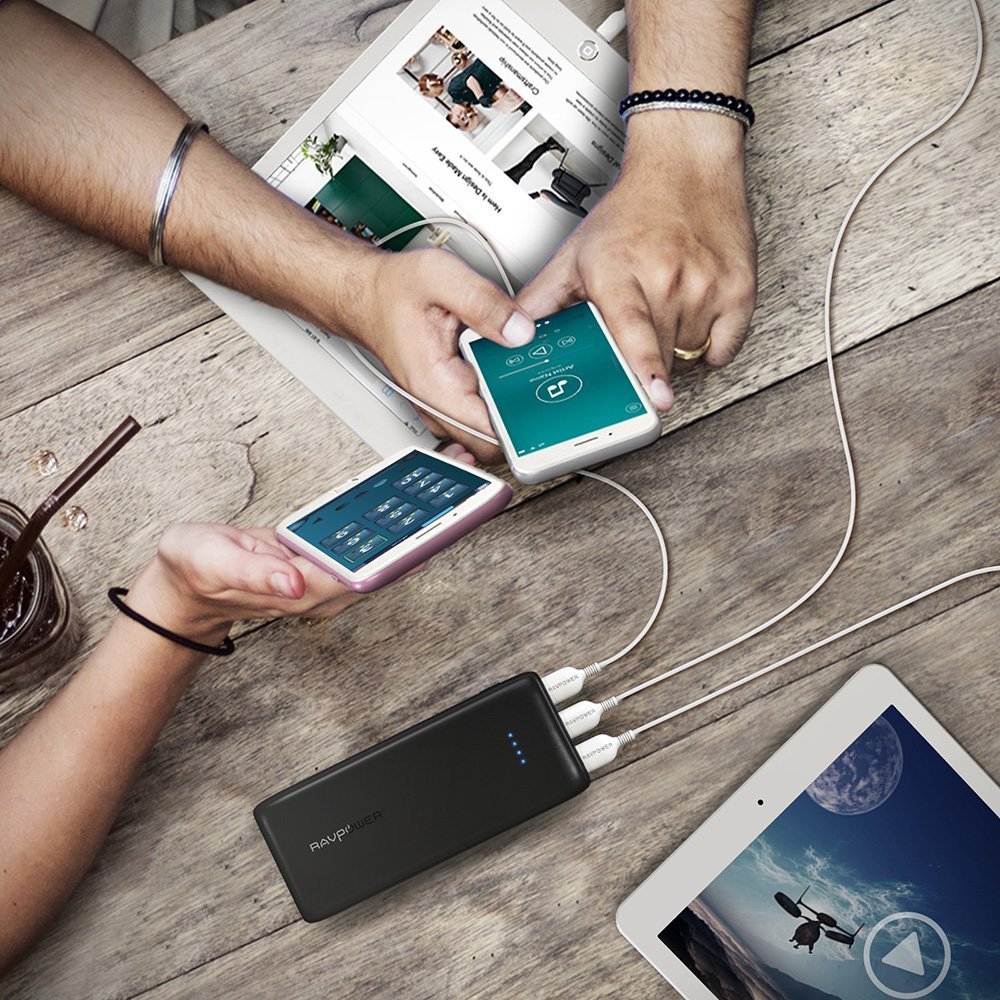 If you suddenly doesn’t feel like any of Anker’s offers. Here is another prime contender with similar voltage protection and 5-star rating on Amazon.

The RAVPower 22000mAh is one really badass power bank. I strongly believe that when this thing is about out of juice, it just runs a loop cable and recharges itself by using its own batteries #ItsScienceBabe.

On a more serious note, what makes RAVPower cool is the high-density Li-polymer a.k.a LiPo battery. I have the Craftsman impact wrench which I bought from Sears (yes that store still exists, there might be a Snorlax there) and it’s powered by the same battery technology.

I swear by the Old Gods and the New, I could use this wrench to take off the all the wheels of all the cars in my entire neighbor and it could still run another round to put those back on.

LiPo battery does not lose charge overtime and they provide consistent power delivery, even under stress circumstances. The best thing about LiPo battery is they could be recharged over 500 times and still retains memory better than Psyduck. According to RAVPower, the unit could do your iPhone 6s up to 9 times, a Galaxy S7 up to 5 times before it gives out. Thatta man!

Now comes the $44.99 dollar question. Will it explode like a Voltorb with all that power? Probably not.

But if it does, the UL94 V-0 fire-resistant alloy shell will definitely prevent it from ever making you look like a terrorist. Just kidding. With iSmart 2.0 (seriously, why technology names always start off with an i all the times), the RAVPower 22000 can adjust the voltage dynamically to prevent surge and overcurrent from damaging your smart phone. Still, it can’t help if you are using a Galaxy Note 7, it’s a known time bomb. 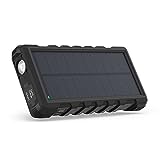 So, Anker or RAVPower ?

Well, the Anker 20k mAh weighs 12.5 ounces while the RAVPower 22k mAh weighs 14.4 ounces. None of these is going to make you ripped, though you may find yourself a little more muscular under certain bathroom lighting condition. That’s the goal of the actual end game anyway. 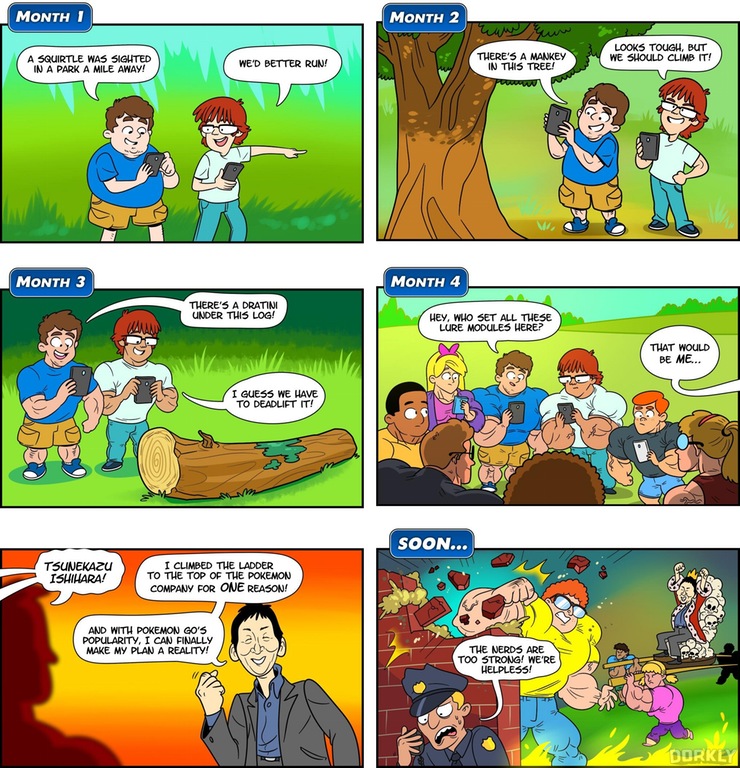 On other hand, they have similar technologies and both provide step up models that bring even more juice to the table. Anker has a longer track record while RAVPower is new in this game with their LiPo battery. Which one do you pick ? Vent with us on our Reddit post!

Not everyone of us needs the big power bank. Secretly we all only want the biggest, but our budget occasionally reminds us our numbers didn’t match the lottery last night and there are still rockie trainers out there beg for our lure modules.

So, below are a few worthy and affordable power banks that won’t break the money bank and have a solid track record of reliablity. They’ll keep you on the hunt long enough for that Dragonite, or evolving all the Ratatas and Pidgeys you got. 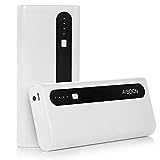 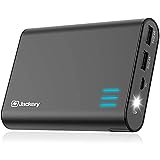 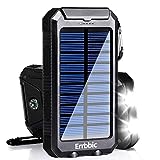 So, that’s it. We have gone over some of the great external battery packs for your phone in this very saturated market. If you google “pokemon go power bank“, there will be hundreds of results. But our post isn’t just the first for no apparent reason. I guarantee you we could find cheaper ones, but the team and I are not comfortable recommending them. There is even this cool Pokeball power bank with LED light decoration.

But a lot of those are from China and will take forever to get here. Also the quality is at best, unknown. If you are looking for an inexpensive one, be sure to be able to filter out the fake reviews.

That aside here are a couple of choices left for the fully dedicated, like the 2 ‘mon masters here… 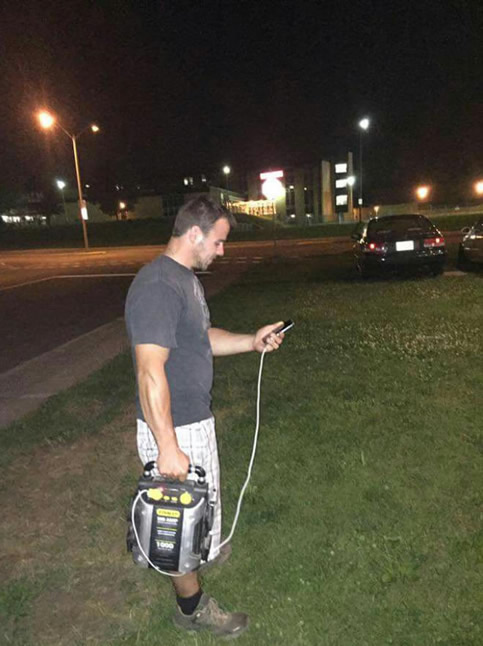 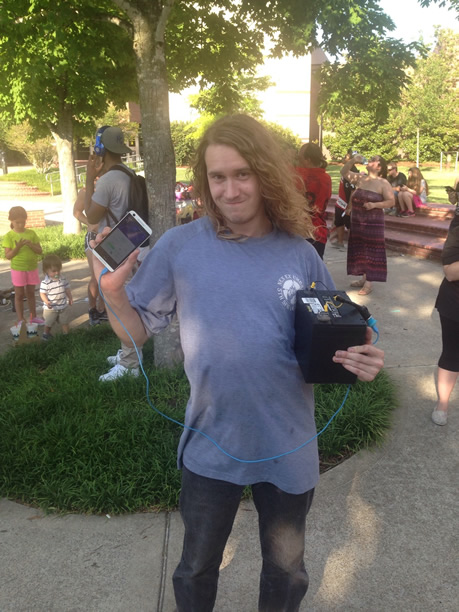 Random question : Is there anyone going to setup a snack stand at a Pokestop and drop lures all day? May the odds be ever in your favor!

— gently drive away in a brand new P1 from the profit of selling snack and lemonade drinks at a Pokestop. 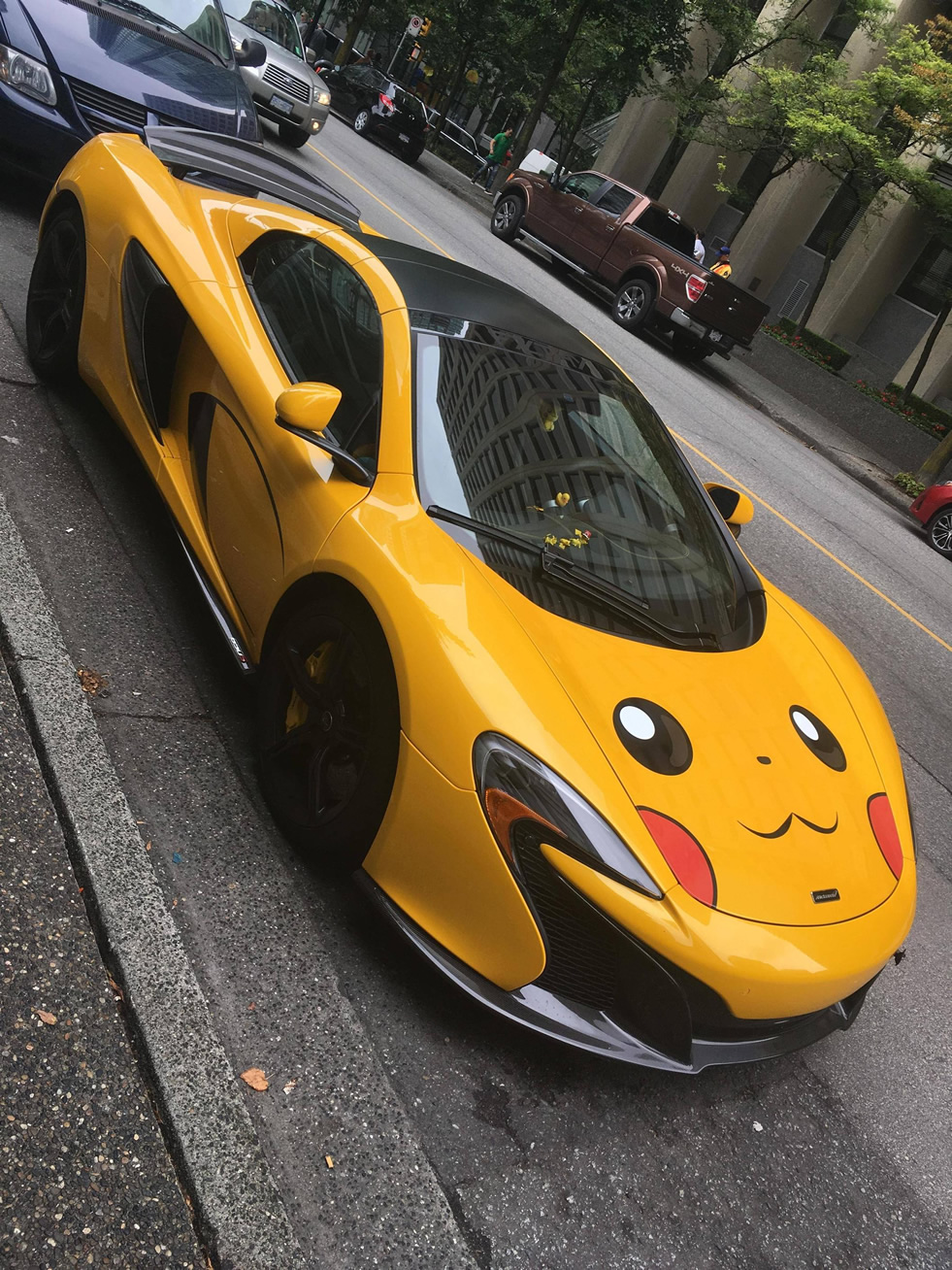 Before you go I’d like you to take a quick break to appreciate such a time to be alive, where there was a Pidgey in my bowl of Pho. 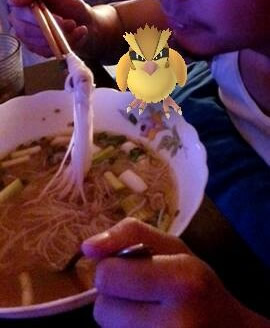 Not impressed, you said ? How about something with more INTENSITY ??? 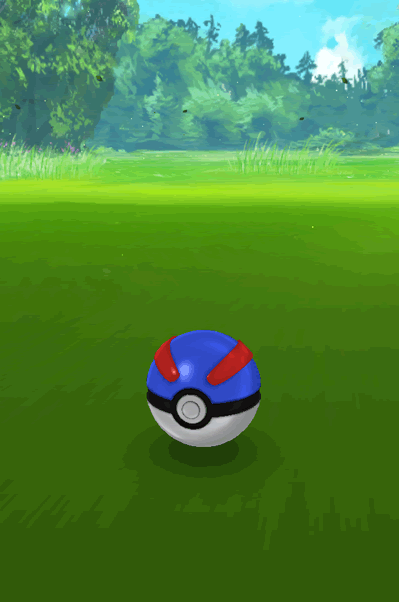